This is an article about VWE a new extruder technology concept that aims to increase build speed , quality and strength in a 3D printer. VWE stands for variable width extruder, it practically is a change in the method a plastic film is deposited on the print bed and layers are stacked.

All standard FFD (Fused Filament Deposition) printers use a nozzle with a circular opening that deposits constant width in all directions. The machine is programmed to deposit along certain paths to create the final geometry. In places where thick walls are needed the nozzle travels several times usually in a slightly overlapping “Snail like path”.

VWE is a nozzle with rectangular slit (Shown in the video below) . The slit has variable width that changes depending on the wall thickness being printed. This allows the printer to build the part walls (Sides , reinforcing ribs , any geometry wider than the standard nozzle width ) with one pass.

However, printing variable width depending on location and orientation requires that the nozzle reorients to keep the nozzle perpendicular to the movement direction. Thus a VWE nozzle requires tow additional actuators , one to control the nozzle width and an additional servo motor at base to orient the nozzle on axes Z.

Further a VWE extruder would require a new algorithm to generate path and nozzle width adjustment and orientation adjustment. This complicates a bit the calculations to generate the path, which is not a burden for todays computer.

A change of deposition rate would need an balance of feed rate which can also be adjusted and controlled by programming. 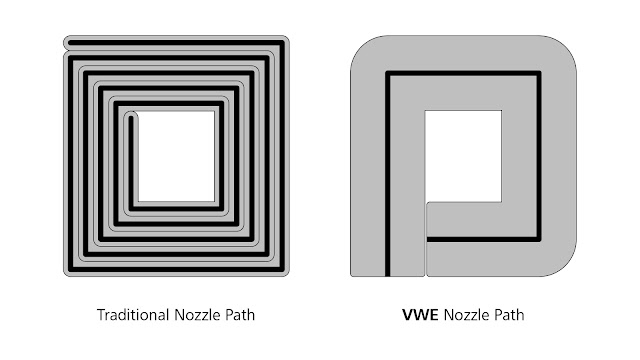 A VWE equipped printer can deposit walls in on path and make 100% fill parts with one path if the total part width is less that the maximum nozzle opening width .

Layers deposited by VWE are more homogenous , consistent and are deposited at same time in a wall, thus with less temperature variation and better bonding between layers.

I have not developed a working prototype of VWE, but if anyone is interested in developing such nozzle I would be glad to cooperate on it. If someone develops VWE nozzle independently , I would only request to reference me as original creator of the concept.