You might be familiar with flip-disk display (The top yellow bus number in the picture) as you probably have seen it in many places, though you might not be familiar with the technology name, how it works and what it is made of.

Flip disk display consists of flat plates with a different color on every side. The disk is flipped using a magnetic actuator so that the color switches. The display cells are placed in a grid and used to write information or make simple drawings. As shown below the same display cell switches from white color to black color by flipping the center disk.

The result of such an assembly of simple systems combined with a proper control system can be a bicolor active display system. The best example is demonstrated in the video below.

Now that you are familiar with the technology, I think the limitations are noticable and one major limitation is color variety. The regular system design only allows a bycolor display.The suggested design described in this article allows a grey scale dispay mode or even an CMYK display + Greyscale that makes possible the display of a full color photo.There is a catch though, the picture display is better when the mechanical pixels are smaller just like any pixel based system. So lets go in details of how four colors pixel can be made and then move to the greyscale additional layer.

If we replace a disk that has two faces withe a cube that has four (or a cylinder divided into four sections) and add two coils behind the cube with a ninty degree angle seperating them, then by switching polarity of the coils the cylinder (or cube) can be rotated in four different steps and positioned with a different side facing a viewer; thus, we create a simple mechanical pixel with four colours. The colors chosen will be Cyan, Magenta,Yellow and White, as CMYK are the colors for print based image not light based (RGB).

White replaces Black in this pixel as the Black (K) will be genrated by the extra Greyscale layer. 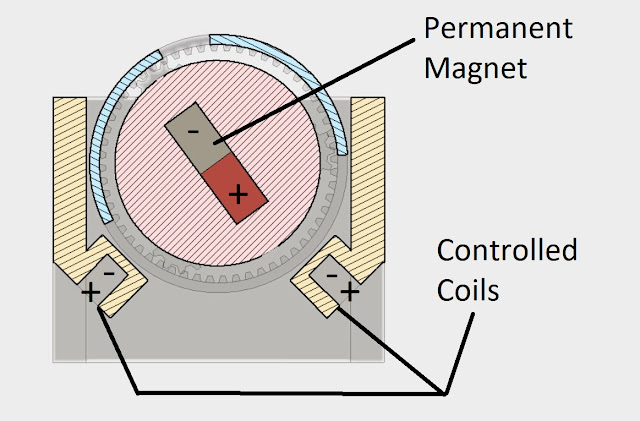 The greyscale layer consists of a black shell that rotates around the pixel and hides it partially or fully. The more the masking layer hides the darker the color will appear for a person looking at it from a distance. Our eye cannot resolve geometry and color when the pixel is smaller and then the colors mix together and the geometry fuses, that is how all light pixel displays work. 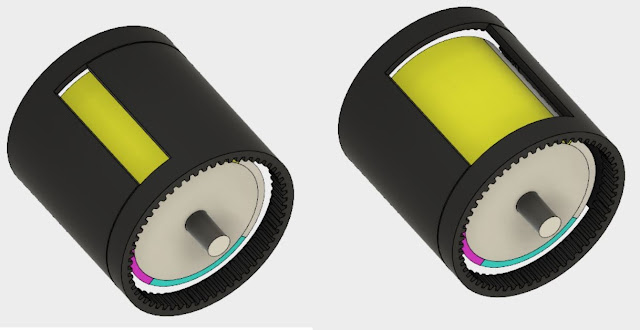 This greyscale masking layer is also controlled by the same coils controlling the cube. With every full rotation of the cube the masking layer hides 1% to 10% of the pixel. So it can be designed to have at least 10 to 100 shades of grey. The masking layer is connected to the cylinder rotation by simple planetary gear system or a screw type gear with gear reduction of 1/10 or 1/100. 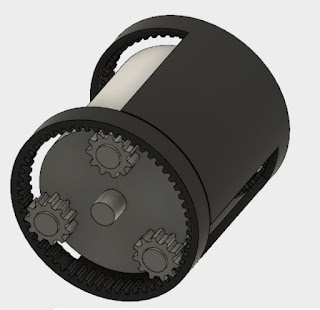 The final result is a pixel that can display four colours and adjust the grey shade in each. It is a mechanical pixel with full shades of CMY and controlled by two coils. An assembly of such pixels has the potential to display a full color picture. The refresh rate of such display would depend on the final construction. If a system with 30 Hz refresh rate can be achieved then the result is a mechanical video display.